How much are homeowners spending in their first year to put their stamp on their property?

How much are homeowners spending in their first year to put their stamp on their property?

There’s very little that compares to the excitement of buying a new home. If you’ve been saving to buy, then you already understand the importance of budgeting, but the need to balance the books doesn’t end once you’ve put down your deposit. There’s new furniture you might need, changes to décor, and maybe more significant home improvements to really make a new house your own.

We wanted to find out how well these budgets hold up against home improvements during the first year after moving. While we found that, on average, UK buyers were pretty good at sticking to their budgets, there were a few surprises.

What are buyers spending on?

Everyone has their own priorities when deciding which home improvements to make in their first year in a new home. Surprisingly, new furniture was only the third highest priority spend, even amongst younger respondents likely to be buying their first property.

Instead, purchasing painting and decorating equipment and choosing paint colour or wallpaper styles were the highest priorities. For many homeowners, interior decoration may be the fastest way to make their mark on a new home, so we can see why these proved to be popular options 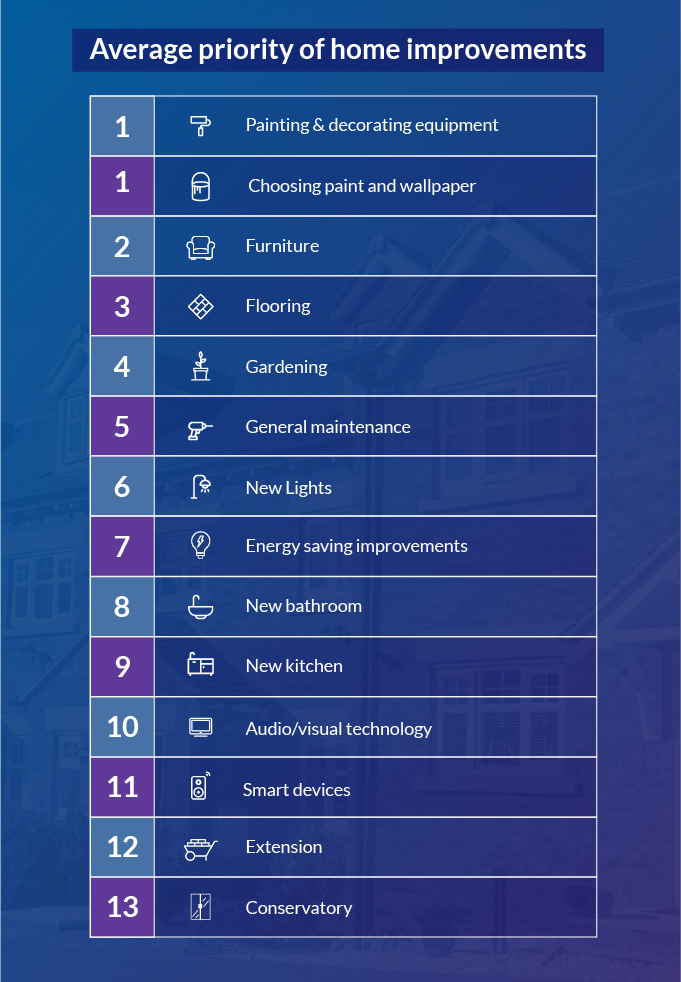 Who spends the most?

Buyers aged 25-34 were the biggest spenders in their first year in a new home, spending more than £20,000 on improvements – almost twice the budget of 18-24s. Typically, these buyers were prioritising paint and wallpaper colours (47%), painting and decorating tools (47%) and new kitchens (43%). Buyers over the age of 65 typically spent the least in the first year after moving, with the majority prioritising paint and wallpaper choices (33%) and new bathrooms (30%) from their £7,000 budget. 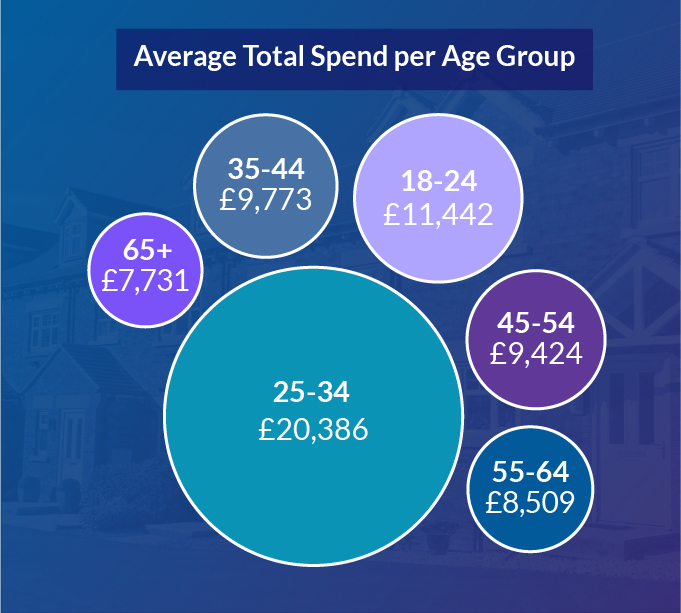 As well as different age groups, there’s some interesting conclusions to be drawn from whereabouts in the UK our respondents come from. Londoners, for example, spend more than double the average spend of other regions. This is likely to be affected by the average cost of living in certain places, with London being the most expensive UK city to live in and often paying higher wages. Meanwhile, Scotland and Yorkshire and Humber, whose new homeowners spent the least in our survey, tend to have lower average wages and living costs. 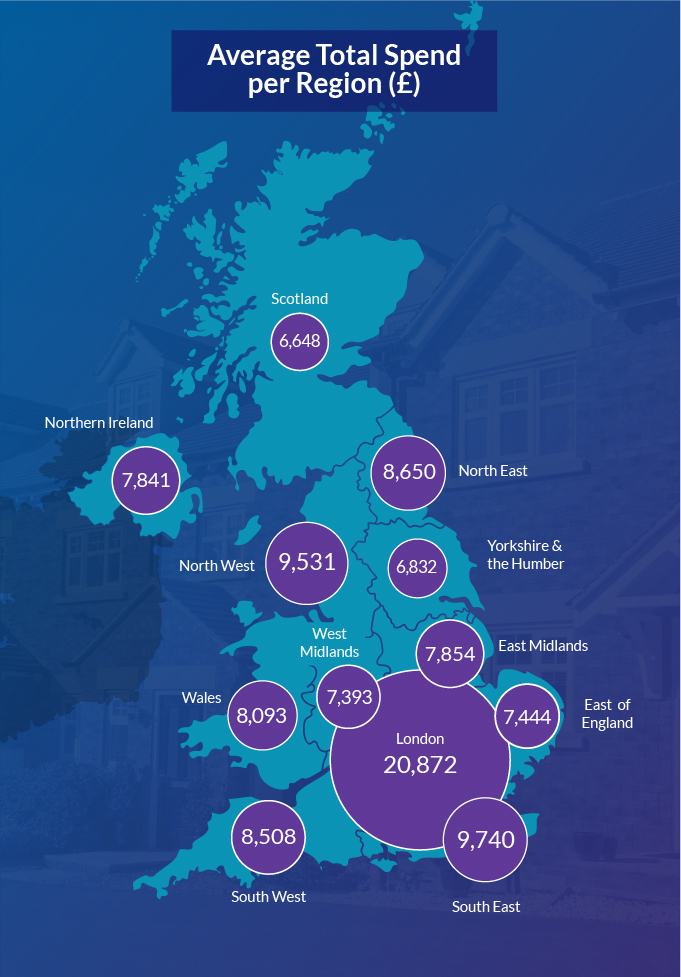 Once you have the keys to your new place, it’s time to start making it feel like your home. Whether that means buying some stylish furniture, extending to give yourself more space, or updating the décor, it all needs factoring into your budget.

On the whole, the homebuyers we surveyed understood their budgets and largely stuck to them, with only a few home improvements ending up costing more than planned on average. People were most likely to spend over their budget on lighting, general maintenance and smart devices, with general maintenance going the most over budget . 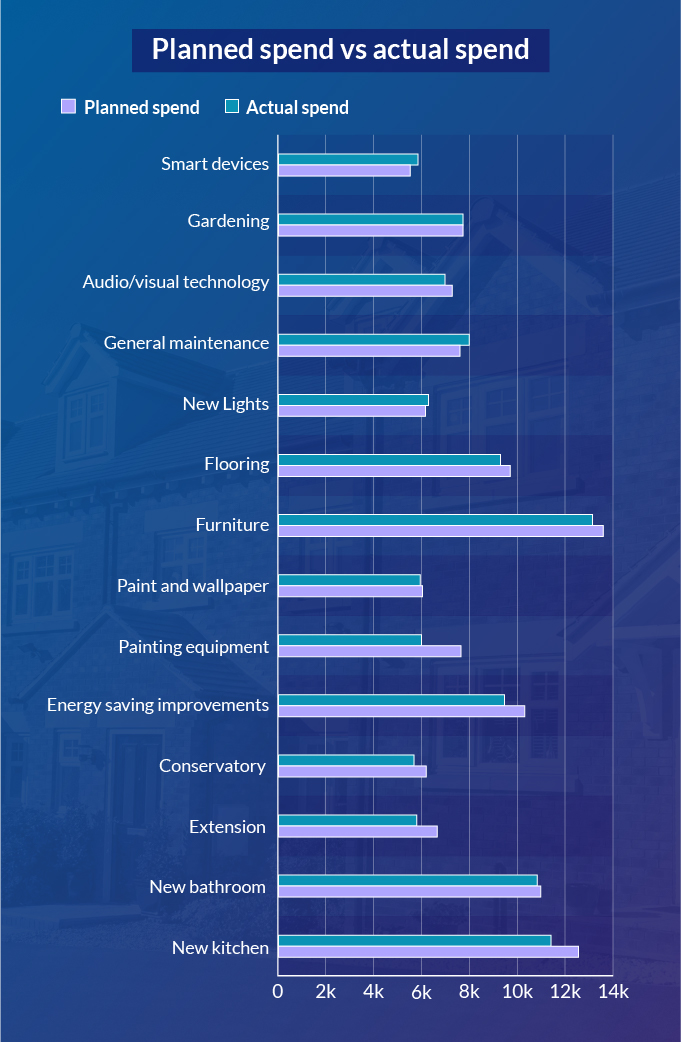 Some of these areas of overspend could come about due to an unforeseen event. For example, many general maintenance spends can come out of the blue, such as boiler breakdowns and plumbing issues. On the other hand, it’s possible that some buyers needed a little more research. Smart devices, for example, are still a relatively new addition to many homes, and may not yet be an established part of the typical cost of home improvements.

Although our homebuyers stuck to their budgets on average, there were a few differences between different age groups. Younger buyers (18-24) were more likely to overspend – by more than a thousand pounds in the case of 18-24s - perhaps due to the excitement of owning their first home and a stronger impulse-buying habit. Our older buyers (65+) were the most likely to come in under budget, saving themselves £976.87. 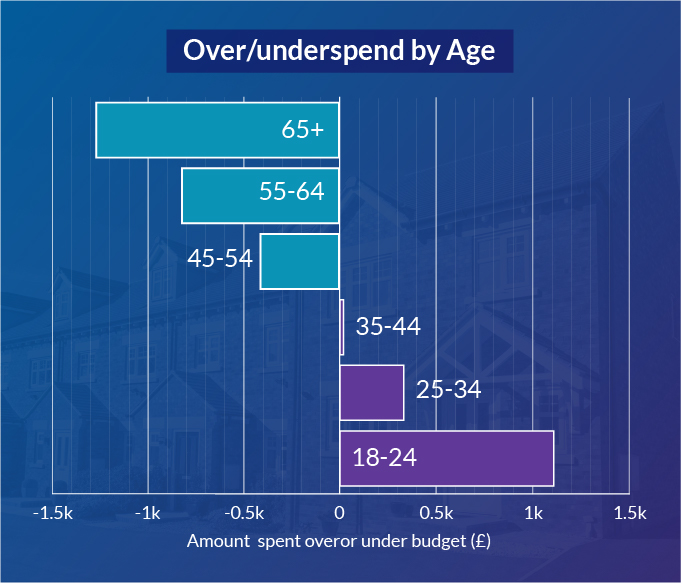 Perhaps unsurprisingly, London was amongst the top locations for overspending on a budget. However, on average, Londoners weren’t overspending by as much as buyers in the East Midlands or the North East. Again, this could be down to the level of disposable income available to buyers in these areas.

As one of the most expensive UK cities to live in, buyers in London are more likely to be prepared for higher spending on home improvements but are more likely to stick to their budget as much as possible due to lower disposable incomes. With the cost of living slightly lower in cities East Midlands and North Eastern cities, homeowners were likely more willing to spend over their budget thanks to a higher average disposable income.

Typically, areas with a lower average disposable income , such as Yorkshire and Humber and the South East were the most likely areas to come in under budget. 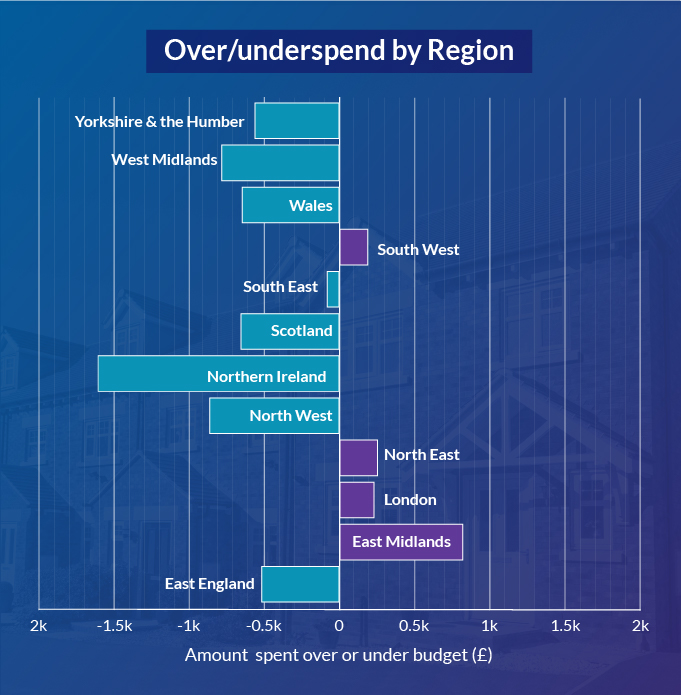 Typically, millennial buyers spent around £4,000 less than the other generations combined. Despite spending similar amount, the different generations had very different opinions when it came to prioritising their home improvements. 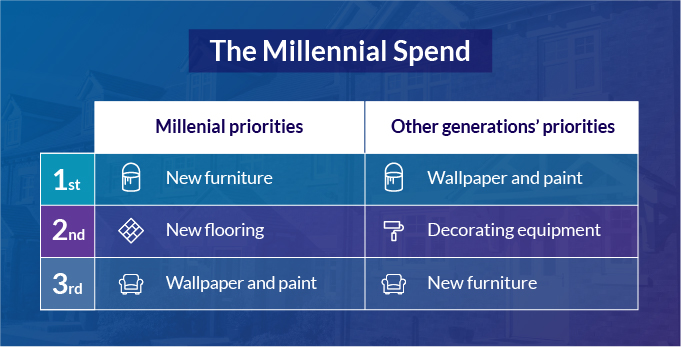 When you buy a new property, you often get to design your new home to suit your tastes and get it exactly how you’d like it. So, you’d imagine that buyers purchasing a new build home spend far less in their first year – right?

When buying a new build, it’s essential to budget for a number of improvements you want to make in the first year. You might love the minimalist look when you first move in, but if you have a young family, you might find you need to reorganise your space. Or, you might find that the neutral décor just isn’t you, and decide you want to redecorate to make the space feel less like a show home and more like your family home. It’s a good idea to budget for these changes that make a house feel like home and put your stamp on your new property.

While overall, home buyers in the UK appear to manage their budgets during the first year in their new home, there were a few key areas where overspending took over.

Each generation and region had their own priorities and spending habits as may have been expected. What was potentially the most surprising was what home improvements were considered the highest priorities and the significant first year spend by new-build buyers.

Our financial experts can offer advice and support in helping you secure extra funding to make necessary home improvements. We’ll consider your credit history, financial circumstances and a range of other factors to help you find a financial solution that’s suitable for you.

For your FREE, no-obligation quote

Get a Quote Now

Get a Quote Now